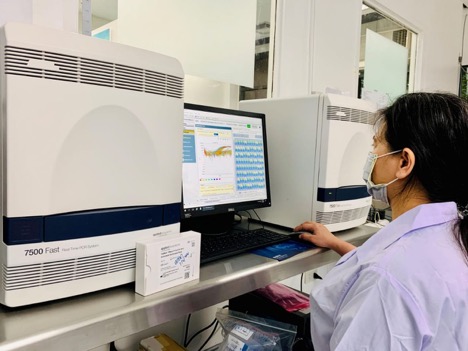 As part of its PhP1 Billion donation for COVID-19 response and relief efforts, the Research Institute for Tropical Medicine (RITM) and the Lung Center of the Philippines (LCP) received two (2) sets each of RT-PCR machines from NGCP on 01 July 2020, while the V. Luna General Hospital (also known as the AFP Medical Center) and Philippine National Police (PNP) Crime Laboratory also received one (1) set of PCR machines each on 05 August 2020. A complete set is composed of an ABI 7500 FAST RT-PCR machine, a desktop computer, and UPS.
RT-PCR tests, which are described by the Department of Health (DOH) as the gold standard in testing for COVID-19, are confirmed through an RT-PCR machine by detecting the actual presence of the virus even when a person is asymptomatic or does not register any of the common COVID-19 symptoms. One machine costs around PhP 2.4 million.
"NGCP recognizes that the availability of vital medical equipment plays a huge factor in the government's COVID-19 response efforts particularly in large government hospitals. We hope that our donation of 6 sets of RT-PCR machines to RITM, LCP, AFPMC, and PNP Crime Lab will expedite the confirmatory process for COVID-19 testing. NGCP's stakeholders and the public can be assured that the company will continue to fulfill its commitment of supporting the country's efforts to combat this pandemic," stated NGCP.
NGCP's PhP1 Billion donation includes grocery items to over 1,000 LGUs and medical equipment such as mechanical ventilators, ultrasound machine, portable x-ray machine, and PPEs to more than 300 hospitals and city/municipal/rural health units across the country. Five (5) brand new ambulances were also turned over to UP-PGH, Philippine Orthopedic Center, Quirino Memorial Medical Center, Philippine Heart Center, and Binan Doctors Hospital.
NGCP also donated 10,000 rapid test kits and 50 testing booths to the local government of Quezon City, and another 500 test kits to Navotas City. More projects aimed to help the country in its fight against the virus are currently in the works, including the donation of four donning and doffing chambers and five isolation rooms for several government hospitals.
The company also donated P5 million to Project Ugnayan which gave supermarket vouchers to families in Metro Manila, initiated the Meals on Wheels feeding program for indigent communities, and donated PPEs to LGUs and medical frontliners.
NGCP is a Filipino-led, privately owned company in charge of operating, maintaining, and developing the country’s power grid, led by majority shareholders and Vice Chairman of the Board Henry Sy, Jr. and Co-Vice Chairman Robert Coyiuto, Jr.###